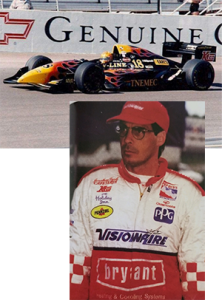 Paul was widely considered as one of the most gifted drivers of his generation.

He made seven starts in the Indianapolis 500 between 1985 and 1998, and he had two IndyCar wins. He passed Rick Mears on the last lap to win at Michigan International Speedway, and he also won an Indy Racing League event at Texas Motor Speedway.

He racked up more than 20 sports car victories. He won the IMSA Camel GT Championship in 1982, opening the season with victories in both the Rolex 24 at Daytona and the 12 Hours of Sebring. He finished second in the 24 Hours of Le Mans in 1984. He earned a second Rolex 24 victory in 1997. At one point he was also a factory driver for Corvette.

His career ended after the 2001 season due to Huntington’s disease, a rare, genetic neurological disorder. He spent the rest of his life working to raise awareness and funding to find a cure for it, and also underwent countless tests to aid medical research.

There is a Go Fund Me page to support his foundation and the UCLA Neurological Department’s search for a cure at this link: bit.ly

My first introduction to John Paul Jr. took place at the 1983 Michigan 500. As a spectator, I saw John pass Rick Mears on the last lap to win the race and I became a John Paul Jr. fan from that day forward. A fan favorite, John always engaged with his followers. He would take the time to not only sign autographs, but also talk with his fans.

In 1996, KECO became a contingency sponsor in the Indy Racing League while John was driving for PDM Racing. In addition to becoming a sponsor, we assisted the PDM team in raising sponsorship for that season.

His IndyCar career proceeded to gain traction, including almost winning the 1998 Indy 500 and winning the IndyCar race in Texas.

Unfortunately, John would be later diagnosed with Huntington’s disease (HD). Before he passed, my wife Cindy and I visited John and Darlene in California. Our last conversation was not about his battle with HD, but about how we were doing. That’s the John I will remember. RIP John Paul Jr. You will be sorely missed.